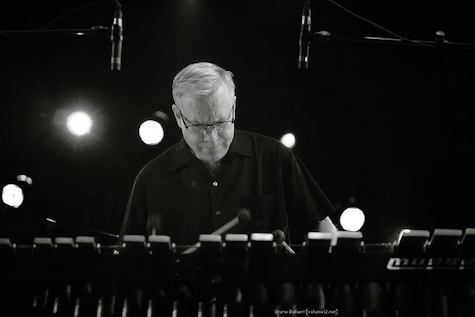 The next show will air on Sunday, November 29, 2015 from 11:00 PM – 1:00 AM Monday Eastern Standard Time on WBAI, 99.5 FM in the NYC metro area or streaming online at wbai.org. This broadcast will feature an interview with vibraphonist, composer, educator and 2016 NEA Jazz Master Gary Burton.

Gary Burton was born in 1943 and raised in Indiana. Burton taught himself to play the vibraphone and, at the age of 17, made his recording debut in Nashville, Tennessee, with guitarists Hank Garland and Chet Atkins. Two years later, Burton left his studies at Berklee College of Music to join George Shearing and subsequently Stan Getz, with whom he worked from 1964-1966. As a member of Getz’s quartet, Burton won Down Beat magazine’s Talent Deserving of Wider Recognition award in 1965. By the time he left Getz to form his own quartet in 1967, Burton had also recorded three albums under his name for RCA. Borrowing rhythms and sonorities from rock music, while maintaining jazz’s emphasis on improvisation and harmonic complexity, Burton’s first quartet attracted large audiences from both sides of the jazz-rock spectrum. Such albums as Duster and Lofty Fake Anagram established Burton and his band as progenitors of the jazz fusion phenomenon.

During his subsequent association with the ECM label (1973-1988) the Burton Quartet expanded to include the young Pat Metheny on guitar, and the band began to explore a repertoire of modern compositions. In the ’70s, Burton also began to focus on more intimate contexts for his music. His 1971 album Alone at Last, a solo vibraphone concert recorded at the 1971 Montreux Jazz Festival, was honored with his first Grammy Award. Burton also turned to the rarely heard duo format, recording with bassist Steve Swallow, guitarist Ralph Towner, and most notably with pianist Chick Corea, thus cementing a long personal and professional relationship that has garnered an additional four Grammy Awards.

In the ’70s, Burton began his music education career with Berklee College of Music in Boston. Burton began as a teacher of percussion and improvisation at Berklee in 1971. In 1985 he was named Dean of Curriculum. In 1989, he received an honorary doctorate of music from the college, and in 1996, he was appointed Executive Vice President, responsible for overseeing the daily operation of the college.

June 2011 saw the release of Common Ground, Gary‘s first release on Mack Avenue Records featuring the New Gary Burton Quartet. The new group reunites the vibist with guitar star Julian Lage with the addition of drummer Antonio Sanchez and bassist Scott Colley. The group toured throughout 2011 and 2013 and released their second CD, Guided Tour, in August 2013.

Burton formed a new band in 2003 after retiring from 33 years of service at Berklee College of Music and began touring regularly. The “Generations” band featured a line-up of talented young musicians including then sixteen-year old guitarist Julian Lage and Russian-born pianist Vadim Nevelovskyi. Gary recorded two CDs with the group titled Generation and Next Generation and the band toured steadily from 2003 through mid-2006.

Burton is also the author of Learning to Listen: The Jazz Journey of Gary Burton. In Learning to Listen, Gary Burton shares his fifty years of experiences at the top of the jazz scene. A seven-time GRAMMY® Award winner, Burton made his first recordings at age seventeen, has toured and recorded with a who’s who of famous jazz names, and is one of only a few openly gay musicians in jazz. Burton is a true innovator, both as a performer and an educator. His autobiography is one of the most personal and insightful jazz books ever written.

Watch Burton in a live performance with guitarist Pat Metheny at the 2008 North Sea Jazz Festival.

Watch Burton in a 2011 live performance with Chick Corea.

Watch Burton in a live 1967 performance with guitarist Larry Coryell in Berlin.