The next show will air on Sunday, January 8, 2017 from 11:00 PM – 1:00 AM Monday Eastern Standard Time on WBAI, 99.5 FM in the NYC metro area or streaming online at wbai.org. This broadcast concludes WBAI’s coverage of the 2017 Winter Jazz Festival. Our focus is the Liberation Music Orchestra, founded by late bassist Charlie Haden that is closing out the 2017 WJF. Featured guests are multi instrumentalist Joe Daley and Ruth Cameron: Haden’s widow, longtime manager and producer of several of Haden’s albums.

Synonymous with the legacy of late jazz bassist Charlie Haden, the Liberation Music Orchestra was one of the most influential groups to emerge from the avant-garde jazz period of the 1960s. Founded by Haden and pianist/collaborator Carla Bley in 1969 as way to protest social and political injustices — and as a vehicle for exploring large-scale works of free and forward-thinking jazz — the Liberation Music Orchestra was a vital component of the bassist’s career until his death in 2014.

Over the next five decades, Haden and Bley would reconvene the LMO with varying lineups for a handful of albums including 1982’s The Ballad of the Fallen, 1990’s Dream Keeper, and 2005’s Not in Our Name. Throughout these recordings and various live performances, Haden displayed both his abundant musical vision and his profound commitment to supporting progressive political movements, environmentalism, and social justice worldwide.

Having contracted polio at age 15, Haden’s health suffered in later years and he was eventually diagnosed with post-polio syndrome. The condition left him in a weakened state and severely limited his ability to perform. Haden died in Los Angeles in July of 2014. He was 76 years old. In 2016, Impulse! released Haden’s final album with the Liberation Music Orchestra, Time/Life (Song for the Whales and Other Beings). Produced by Haden’s wife, Ruth Cameron Haden, and Carla Bley, the album featured a live performance Haden gave with the Liberation Music Orchestra in Belgium in 2011, along with three new studio recordings the LMO made after his death with bassist Steve Swallow, one of Haden’s many longtime friends.

Charlie Haden’s Liberation Music Orchestra will be closing the 2017 Winter Jazz Festival at Le Poisson Rouge at 8:00 PM on January 10 with pianist Geri Allen. This concert will be preceded by a panel discussion on social and environmental justice at 6:00 PM.

Read our report from Haden’s NYC memorial service on our blog. Also listen to Joyce Jones’s interview of Charlie Haden and Ruth Cameron on an earlier show.

Watch the Liberation Music Orchestra play “Throughout” in this live clip. 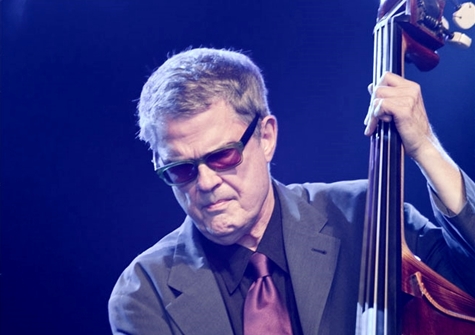 The next show will air on Sunday, July 20, 2014 from 11:00 PM – 1:00 AM Monday Eastern Standard Time on WBAI, 99.5 FM in the NYC metro area or streaming online at wbai.org. This installment of the program will be a memorial to bassist, composer, and former yodeling cowboy Charlie Haden, who died on July 11th. As a tribute to this great artist, we’re re-broadcasting our interview with Haden and wife/musical collaborator Ruth Cameron, originally aired on April 10, 2011.

Born in Shenandoah, Iowa, Charlie Haden began his life in music almost immediately, singing on his parents’ country & western radio show at the tender age of 22 months. He started playing bass in his early teens and in 1957 left America’s heartland for Los Angeles, where he met and played with such legends as Art Pepper, Hampton Hawes, and Dexter Gordon.

In 1959, Haden teamed with Ornette Coleman to form the saxophonist’s pioneering quartet (alongside trumpeter Don Cherry and drummer Billy Higgins). In addition to his still-influential work with Coleman, Haden also collaborated with a number of adventurous jazz giants, including John Coltrane, Archie Shepp, and Keith Jarrett, Pat Metheny.

An acoustic bassist of extraordinary gifts, Haden’s talents as a musician have been in constant demand by his fellow artists. As a result, he has collaborated with a genuinely stunning array of musicians, including Hank Jones, Don Cherry, Dewey Redman, Paul Motian, Jack DeJohnette, Michael Brecker, Kenny Barron, and Pat Metheny (with whom Haden shared a 1997 “Best Jazz Instrumental Individual/Small Group” Grammy® Award for their Beyond the Missouri Sky).

Haden’s love of world music has also seen him teaming with a variety of diverse international players, including Brazilian guitarist Egberto Gismonti, Argentinean bandoneon master Dino Saluzzi, and Portuguese guitar giant Carlos Paredes. In addition, Haden has explored diverse streams of American popular music with both his acclaimed Quartet West, as well as on such recent collections as 2002’s inventive alliance with Michael Brecker, American Dreams.

Haden was invited to establish the jazz studies program at California Institute of the Arts in 1982 and has earned countless honors from around the globe, including and the Los Angeles Jazz Society prize for “Jazz Educator of the Year”, two Grammy Awards (alongside a multitude of nominations), myriad Down Beat readers and critics poll winners, a Guggenheim fellowship, four NEA grants for composition, France’s Grand Prix Du Disque (Charles Cros) Award, Japan’s SWING Journal Gold, Silver and Bronze awards. Montreal Jazz Festival’s Miles Davis Award.

On Friday, July 11, 2014, Charlie Haden left this world. He is survived by his wife Ruth Cameron, his four children, Josh, Tanya, Petra and Rachel, a brother, Carl, a sister, Mary, and three grandchildren. Tanya Haden is married to singer and actor Jack Black.

We’re not aware of any NYC Metro area tributes or memorials to Haden at this time. Follow our “On the Bandstand” segment on air and on our blog and we’ll pass on info as we get it.

Watch Haden conduct (and play with) the Liberation Music Orchestra in this 1987 performance with Dewey Redman live in Africa.