For the Love of Abbey 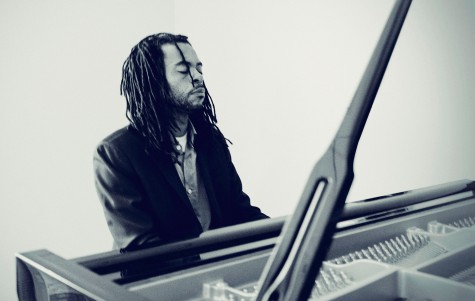 Marc Cary holds tight to his roots in Washington, D.C.’s go-go music scene, but they represent only one element among the myriad. Cary’s interests run from Indian classical to Malian music to hip-hop. He started his career working with Betty Carter, a legendary vocalist famous for drawing soul and sincerity out of her bands, and went on to work with Roy Hargrove, Dizzy Gillespie, Erykah Badu, Shirley Horn, Stefon Harris, Q-Tip and – most influential of all – Abbey Lincoln.

Marc Cary was born in New York City in 1967, but moved to D.C. as a young child. Growing up in a neglected city during the 1970s and ’80s, it was easy to run into trouble – but music remained a steadying force. At 14 he joined the High Integrity Band, a group that practiced the native D.C. art form of go-go, a dance music blending funk, hip-hop, Afro-Caribbean drumming and traditional call-and-response elements. With the help of a city-run public arts program, Let ’Em Play, he learned jazz piano from some of D.C.’s most esteemed musicians and performed professionally during summers.

For high school Cary attended the Duke Ellington School of the Arts, and played in the Dizzy Gillespie Youth Orchestra, based at the storied D.C. jazz club Blues Alley. When Cary took a standout solo during a performance of “A Night in Tunisia,” it caught the ear of Gillespie himself, and from then on the trumpet legend let Cary sit in whenever his band came through D.C.

A fledgling Cary soon came under the wing of that group’s pianist, Walter Davis, Jr., who encouraged him to move to New York City. And after two years of studying at the University of the District of Columbia under the tutelage of renowned trombonist and educator Calvin Jones, Cary did relocate in 1988. Within months of arriving in the jazz capital, he was playing in bands led by Arthur Taylor, Mickey Bass and Betty Carter, all major figures from jazz’s mid-century heyday.

He went on to perform with the Abraham Burton Quartet, then rejoined Betty Carter, and finally ended up alongside Abbey Lincoln. “Going from Betty to Abbey was like going from the street to the theater,” Cary says. With Lincoln, “you had to have that same skill as you needed with Betty, but it was supposed to allow you to not have to do any of the kinds of things Betty always demanded.” From Lincoln he learned the power of simplicity, focus and soul-baring musical poetry.

In 1995, Cary released his debut, Cary On, a striking record that introduced his songwriting talents with grooving originals like “The Vibe” and “So Gracefully.” The album featured an all-star cast including Hargrove and saxophonist Ron Blake. He followed it with 1997’s Listen, then The Antidote in 1998 – both strong displays of Cary’s developing skills as a broad-minded pianist and bandleader. Trillium, released in 1999, found Cary working with longtime collaborators Nasheet Waits on drums and Tarus Mateen on bass (the rhythm section that would soon become the foundation of Jason Moran’s award-winning Bandwagon trio). On Trillium, the only official document of the Cary-Mateen-Waits trio, they pummel past the blues, playing with joy, conviction and heavy-stepping strength over originals and covers of tunes by Miles Davis and Duke Pearson.

By the mid-2000s, Cary had developed a new jazz trio with an intimate rapport. He called it the Focus Trio, and it featured David Ewell on bass and Sameer Gupta on drums and tablas. With this group Cary found a new way to juxtapose his improvisational calmness and equipoise with a pulsing urgency and a sense of searching.

He has kept that curiosity and quest for peace at the forefront of his work with the trio, which released exploratory live albums in 2008 and 2009. And the same spirit has permeated his other projects, from For the Love of Abbey to Cosmic Indigenous. The latest incarnation of the Indigenous People ensemble, Cosmic Indigenous blends Indian classical, go-go and Malian music to form an infectious, danceable, electronically throbbing whole. As a sideman, Cary continues to tour with Stefon Harris, Cindy Blackman, Will Calhoun and other preeminent jazz musicians.

WBAI Radio is in the middle of our Spring Fund Drive. Don’t worry: you’ll be getting the same great show as always! But please head on over to WBAI’s Pledge Page and support the station that allows us to do this work.