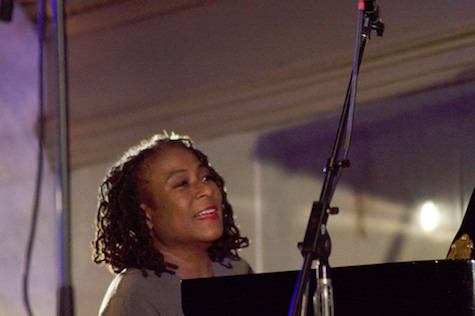 Geri Allen, pianist/composer, bandleader, educator and Guggenheim Fellow, was the first recipient of the Soul Train, Lady of Soul Award for Jazz. In 2011 Geri Allen, was nominated for an NAACP Award for her Timeline, Tap Quartet Project. Allen was the first woman, and youngest person to receive the Danish Jazz Par Prize. She was a cutting edge performing artist, and continues to concertize internationally.

Allen a recipient of the Howard University, Pinnacle Award presented by Professor Connaitre Miller and Afro Blue. Ms. Allen has been a faculty member at Howard University, the New England Conservatory, and the University of Michigan where she taught for ten years.

She was the musical director of the Mary Lou Williams Collective, recording and performing the music of the great Mary Lou Williams, including her sacred work, Mass For Peace. Allen collaborated with S. Epatha Merkerson and Farah Jasmin Griffin on two music theatre projects, “Great Apollo Women”, which premiered at the legendary Apollo Theatre, and “A Conversation with Mary Lou”, which premiered at the Harlem Stage, as an educational component for the Harlem Stage collaboration. The featured artist was Carmen Lundy, and Allen’s long time trio members Kenny Davis and Kassa Overall). The University of Pittsburgh hosted the first ever Mary Lou Williams Cyber Symposium where ViJay Iyer, Jason Moran, and Allen performed a three piano improvisation from Harvard, Columbia and the University of Pittsburgh, in real time using Internet 2 technology.

Geri Allen was the product of a family of educators. Her father Mount V. Allen Jr was a retired Detroit Public School Principal, and her mother Barbara Jean was a defense contract administrator for the U.S. Government. “Our parents insisted my brother and I go to college. We took their advice. I pursued a career as a jazz performer, and completed my undergrad degree at Howard, and my master’s at Pitt. Mount pursued a career as a jazz advocate and presented, completing his masters at Lehigh University. He is currently Director of Operations, at the San Francisco Jazz Center.”

Allen had enjoyed a very successful over thirty-year performing career as a NYC jazz musician. She returned to Pittsburgh to continue her legacy as a cutting edge pianist/composer, recording and performing artist. Allen was just as passionate about her work with her undergrad and graduate students at the University of Pittsburgh, and she firmly believed that “meaningful access to music was one of the keys to success in any field, and music informs our sensitivity to others”. She was a fierce advocate for all children of all ages to have direct hands on access to music, and the creative and empowering process jazz inspires.

The next show will air on Sunday, March 23rd, 2014 from 11:00 PM – 1:00 AM Monday Eastern Standard Time on WBAI, 99.5 FM in the NYC metro area or streaming online at wbai.org. During this installment, Suga’ in My Bowl covers the final of four women in different areas of this music during its four weeks of broadcasting in Women’s History Month. This week’s guest is president of Motema Records, guitarist and vocalist Jana Herzen.

Many jazz aficionados only know Jana Herzen as the founder and president of the acclaimed Motéma label. Under her stewardship, Motéma has advocated for visionaries Randy Weston, Monty Alexander, Gregory Porter, Geri Allen, Rene Marie and dozens of other dynamic and virtuosic composer/performers. What many may not realize, however, is that Ms. Herzen, whose initial professional life was in the theater, is a seasoned performer and instrumentalist with quite a talent for writing and performing.

Founded in San Francisco by Herzen in collaboration with arts patrons and industry professionals, Motéma Music now makes its home in Harlem, New York City. The label specializes in jazz and other creative music that spans genres, cultures and generations. The company’s varied international roster of releases has received Grammy® nominations in jazz, reggae and R&B. At a time when many of the big record labels have moved away from promoting jazz or are content to mine their vaults for recordings that can be re-issued as profitable box sets, Motéma is one of a handful of smaller labels that has signed on new artists and made it possible for established artists to release new material.

Herzen told The Forward in an interview that “the whole record label model is based on, ‘Let’s see if we can make a bunch of money off the backs of these artists.’” Herzen is attempting to follow a different model that focuses on the art itself and its creators and fans.

In this show, we’ll talk about all of that and more with Herzen. We’ll get into not only the difficulties of running a record label that releases jazz now, but also the opportunities that creates and what it means to be involved in this key area of the music. We’ll also talk to her about her own creative work as a musician.