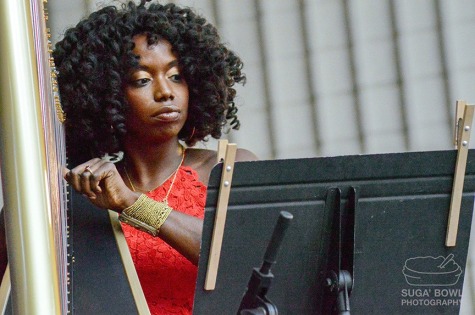 Program note: We’re back on air after a long hiatus for WBAI’s Fall Fund Drive, but will be pre-empted on New Year’s Eve for special programming.

The next show will air on Tuesday December 24, 2019 from 10:00 PM – 12 Midnight Eastern Standard Time on WBAI, 99.5 FM in the NYC metro area or streaming online at wbai.org. This installment of “Suga’ In My Bowl” we will close out 2019 with harpist Brandee A. Younger. We’re going to revisit an interview from 2011 when we focused on harpist Dorothy Ashby. In the second hour, we’ll present an updated discussion to learn more about Ms. Younger and prepare for some upcoming events.

Harpist Brandee Younger defies genres as a classically-trained musician playing in the avant-garde tradition of her musical predecessors Dorothy Ashby and Alice Coltrane. Ms. Younger delivers a fresh take on the instrument as an educator, curator, solo artist and leader of her own ensemble, The Brandee Younger Quartet. She has produced an impressive body of work since the 2011 debut of her Prelude EP. Her discography includes Brandee Younger Live @ The Breeding Ground, Bluenote Records and Revive Music’s 2015 album Supreme Sonacy Vol. 1, the critically-acclaimed 2016 album Wax & Wane and a 2018 appearance as a featured artist on the Impulse tribute to The Beatles titled A Day in the Life: Impressions of Pepper. Her most recent album Soul Awakening is the first full-length recorded by Younger.

Known for expressive interpretations of traditional harp repertoire as well as her continued work with a diverse
cross-section of musical talents, Ms. Younger is widely recognized as a creative linchpin whose nuanced presence
and willingness to push boundaries have made her irreplaceable on record and in performance. She has shared the stage with jazz leaders and popular hip-hop and r&b titans including Ravi Coltrane, Pharoah Sanders, Jack Dejohnette, Reggie Workman, Common, Maxwell, John Legend and Lauryn Hill. Most recently, her original composition “Hortense” was featured in the documentary “Homecoming” by Beyoncé Knowles.

Brandee Younger will participate in a tribute to Turiya Alice Coltrane as a member of Brooklyn Raga Massive on December 27 at the Rubin Museum. She’ll also be at the Winter Jazz Festival’s first Marathon Night on January 11 to present her latest release “Soul Awakening” along with other selections and on another stage with Makaya McCraven. Follow our blog for a preview and additional Winter Jazz Fest coverage.