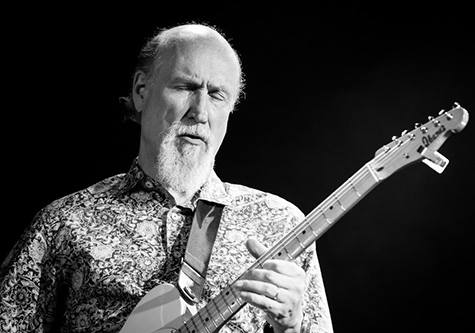 The next show will air on Sunday, February 4, 2018 from 11:00 PM – 1:00 AM Monday Eastern Standard Time on WBAI, 99.5 FM in the NYC metro area or streaming online at wbai.org. This broadcast focuses on 2016 Grammy winner for Best Jazz Instrumental Album guitarist, composer, arranger and occasional singer John Scofield.

John Scofield’s guitar work has influenced jazz since the late 70’s and is going strong today. Possessor of a very distinctive sound and stylistic diversity, Scofield is a masterful jazz improviser whose music generally falls somewhere between post-bop, funk edged jazz, and R & B.

Born in Ohio and raised in suburban Connecticut, Scofield took up the guitar at age 11, inspired by both rock and blues players. He attended Berklee College of Music in Boston. After a debut recording with Gerry Mulligan and Chet Baker, Scofield was a member of the Billy Cobham-George Duke band for two years. In 1977 he recorded with Charles Mingus, and joined the Gary Burton quartet. He began his international career as a bandleader and recording artist in 1978. From 1982–1985, Scofield toured and recorded with Miles Davis. His Davis stint placed him firmly in the foreground of jazz consciousness as a player and composer.

Touring the world approximately 200 days per year with his own groups, he is an Adjunct Professor of Music at New York University, a husband, and father of two.

John Scofield will be one of the artists participating in a benefit for Chamber Music Studio on Wednesday, February 6, at Le Poisson Rouge. We will also have a quick discussion with one of the benefit’s co-organizers trumpeter Steven Bernstein. See the Le Poisson Rouge website for show details and ticket information. He’ll also be at Roulette in Brooklyn for a John Abercrombie tribute on February 26 and has a run at the Blue Note from April 3-8.

Watch Scofield and guitarist Pat Metheny team up to perform “The Red One” in this live clip!

Watch Scofield in in this 2016 live clip from Amsterdam.

The next show will air on Sunday December 9, 2012 from 11:00pm – 1:00am Monday on WBAI, 99.5 FM in the NYC metro area or streaming online at wbai.org. On this installment of “Suga’ In My Bowl,” we will present keyboardist, composer, “arti-vist” and one-third of the group Medeski Martin and Wood, John Medeski. Join in and help us “Reboot WBAI“!

As the keyboardist in the trailblazing instrumental trio Medeski Martin & Wood, solo performer, leader of his own project the Itch, film composer, and producer, collaborator and sideman with countless other artists, Medeski has channeled this transformative force with uncanny power and imagination.

A skilled composer and whirling-dervish improviser, he consistently wrings sonic revelations from acoustic and electric piano, Hammond organ, Clavinet, Mellotron, assorted synthesizers and other instruments. He’s nearly as dynamic visually as aurally, windmilling his hands across the keys, leaning into a B-3 stab, reaching inside the piano to tap the strings with a screwdriver.

Whether the music he’s playing at any given moment can be classified as jazz, funk, modern classical, avant-noise, roots music, rock or “world,” however, is of little concern. “I never separated music into categories,” he insists. “Whoever I’m playing with, I just think, ‘What can I add that will be part of this? Does it need anything?’”

He was born in Kentucky but raised in Florida, starting piano lessons at the tender age of five. Though his fervor for music wasn’t instantaneous, he had his first “out-of-body experience” playing a Mozart sonata while still an adolescent. “It was a competition, and I guess I arrived late, because I had no time to get ready and just sat down and played,” he recalls. “It was like I wasn’t even playing – I was just transported. After that, I did whatever I could to get that feeling back.”

Medeski sold his piano before leaving home to attend the New England Conservatory (NEC) in Boston. He continued to play piano there, but the discovery of a dust-covered Hammond B-3 organ in a rehearsal hall would significantly alter his course. “I’d checked out the B-3 before and listened to Jimmy Smith and Larry Young,” he notes, “but this time, when we started jamming with it, I was blown away. It was a universe of sound. I was playing a lot of free jazz at the time and really got into the coloristic possibilities of the instrument.”

A group that effortlessly straddles the gap between avant-garde improvisation and accessible groove-based jazz, Medeski, Martin & Wood have simultaneously earned standings as relentlessly innovative musicians and as an enormously popular act. Emerging out of the New York downtown scene in the early ’90s, MMW soon set out on endless cross-country tours before returning home to Manhattan to further refine their sound through myriad influential experimentations. Each of the musicians — keyboardist John Medeski, drummer/percussionist Billy Martin, and bassist Chris Wood — had crossed paths throughout the ’80s, playing with the likes of John Lurie, John Zorn, and Martin mentor Bob Moses. In 1991, the trio officially convened for an engagement at New York’s Village Gate. Soon, the group was rehearsing in Martin’s loft, writing, and then recording 1992’s self-released Notes from the Underground. As the group began to tour, escaping the supportive though insular New York music community, Medeski — a former child prodigy — switched to a Hammond B-3 organ rather than a grand piano.

WBAI is also in the middle of a short fund drive to help the station recover from time off the air during Hurricane Sandy. While we’re airing a regular show this time, If you haven’t pledged recently, please consider making a donation while we’re on the air. Copies of The Journey radio documentary with Bobby Sanabria that chronicles the trip of music from Africa to the Caribbean and Latin America are still available, as are copies of The Blues Journey with Dr. Guthrie Ramsey.