Life in This World 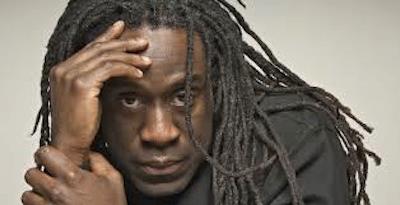 The next show will air on Sunday May 5, 2013 from 11 PM to 1 AM Eastern Standard Time on WBAI Radio, 99.5 FM in the NYC metro area or streaming online at wbai.org. This installment of the program will feature drummer and percussionist Will Calhoun.

Hard-hitting Living Colour drummer Will Calhoun returns to his Jazz roots on his soon to be released “Life In this World.” Join us while we discuss parts of Brother Will’s drum and recording journey.

Will Calhoun, the widely acclaimed drummer from the Bronx, New York, graduated from the Berklee School of Music in Boston, where he received a Bachelors degree in Music Production and engineering. He was also the recipient of the prestigious Buddy Rich Jazz Masters Award for outstanding performance by a drummer.

Will’s first jazz CD as a bandleader is entitled The Will Calhoun Quintet: Live at the Blue Note. The disc is an adventurous journey through Will’s approach to acoustic Jazz, World and Ambient music. The line-up features Bobby Watson-sax, Terrell Stafford-trumpet, John Benitez-bass and Orrin Evans-piano. Will’s song writing, arrangements and drumming on this CD are ground breaking. Although this was Will’s first attempt at fronting a jazz group, Down Beat Magazine, Jazz Times, and Billboard Magazine have given the CD top ratings. Drum Magazine’s readers poll voted Will’s CD 1st runner up for Drummer/Band leader.

One of Will’s latest creations is his follow-up release on the Halfnote label: Native Lands. Native Lands can be described as Jazz meets World, meets trance-inducing Urban music. This is a double package – CD/DVD in which Calhoun marries his far reaching interests in a genre-bending collection that taps key expressionists from various backgrounds. Among those contributing are Pharoah Sanders, Mos Def, Buster Williams, Stanley Jordan, Kevin Eubanks, Marcus Miller and Wallace Roney, as well as Nana Vasconcelos from Brazil and Cheick Tidiane Seck from Mali. The album includes a DVD with over ninety minutes of music videos and documentary materials that chronicle the last ten years of Will’s life and travels.

The “Life In This World” CD Release event is scheduled for Friday to Sunday, May 17-19, 2013 at New York City’s Blue Note. See the Tour Schedule page on Will’s site for additional dates.

For all you Living Colour fans, the band is touring again and working on new material. See their tour schedule for information for these dates.

Watch Oumou Sangare with her band featuring Will at the 2012 Essaouira Gnaoua and World Music Festival.