The next show will air on Sunday, May 29, 2016 from 11:00 PM – 1:00 AM Monday Eastern Standard Time on WBAI, 99.5 FM in the NYC metro area or streaming online at wbai.org. This membership/fund raising broadcast will preview the 2016 Vision Festival and feature interviews with pianist Geri Allen (in her first time Vision appearance), guitarist Marc Ribot, drummer Andrew Cyrille and composer/vocalist Lisa Sokolof honoring the career of bassist Henry Grimes. As usual, we will hear from organizer Patricia Nicholson Parker.

WBAI is media sponsor of Vision 21, New York’s longest running jazz festival. It starts June 5 with films on the Sun Ra Arkestra at Anthology Film Archives and moves to Judson Memorial Church from June 7 through 12 for nightly live avant garde jazz, poetry, dance, and visual art. See the full schedule at their site.

During this membership program, Arts for Art has generously donated 3 one-day passes to offer as thank you gifts for those who support WBAI-FM. You can pledge online or call in during the show. Suga’ will also offer 7 autographed copies of Quincy Troupe’s Miles & Me as a thank you gift for a pledge to help WBAI-FM/Pacifica Radio in New York continue to provide programming you enjoy.

From the publisher’s description of Miles and Me:

Quincy Troupe’s candid account of his friendship with Miles Davis is a revealing portrait of a great musician and an intimate study of a unique relationship. It is also an engrossing chronicle of the author’s own development, both artistic and personal. As Davis’s collaborator on Miles: The Autobiography,Troupe–one of the major poets to emerge from the 1960s–had exceptional access to the musician. This memoir goes beyond the life portrayed in the autobiography to describe in detail the processes of Davis’s spectacular creativity and the joys and difficulties his passionate, contradictory temperament posed to the men’s friendship. It shows how Miles Davis, both as a black man and an artist, influenced not only Quincy Troupe but whole generations.

Watch the trailer for Vision 21: 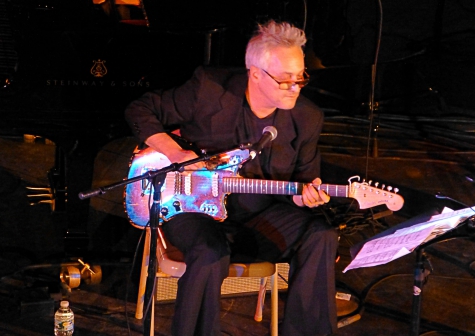 The next show will air on Sunday, February 8, 2014 from 11:00 PM – 1:00 AM Monday Eastern Standard Time on WBAI, 99.5 FM in the NYC metro area or streaming online at wbai.org. This broadcast features an interview with guitarist Marc Ribot. You can hear a short preview below.

Marc Ribot (pronounced REE-bow) was born in Newark, New Jersey in 1954. As a teen, he played guitar in various garage bands while studying with his mentor, Haitian classical guitarist and composer Frantz Casseus. After moving to New York City in 1978, Ribot was a member of the soul/punk Realtones, and from 1984 – 1989, of John Lurie’s Lounge Lizards. Between 1979 and 1985, Ribot also worked as a side musician with Brother Jack McDuff, Wilson Pickett, Carla Thomas, Rufus Thomas, Chuck Berry, and many others.

Ribot has released over 20 albums under his own name over a 35-year career, exploring everything from the pioneering jazz of Albert Ayler with his group Spiritual Unity (Pi Recordings), to the Cuban son of Arsenio Rodríguez with two critically acclaimed releases on Atlantic Records under Marc Ribot Y Los Cubanos Postizos. His avant power trio/post-rock band, Marc Ribot’s Ceramic Dog (Pi Recordings), continues the lineage of his earlier experimental no-wave/punk/noise groups Rootless Cosmopolitans (Island Antilles) and Shrek (Tzadik). Ribot’s solo recordings include Marc Ribot Plays The Complete Works of Frantz Casseus (Les Disques Du Crepuscule), John Zorn’s The Book of Heads (Tzadik), Don’t Blame Me (DIW), Saints (Atlantic), Exercises in Futility (Tzadik), and his latest Silent Movies released in 2010 on Pi Recordings was described as a “down-in-mouth-near master piece” by the Village Voice and has landed on several Best of 2010 lists including the LA Times and critical praise across the board. 2013 saw the release of “Your Turn” (Northern Spy), the sophomore effort from Ribot’s post-rock/noise trio Ceramic Dog, and 2014 saw the monumental release: Marc Ribot Trio Live at the Village Vanguard (Pi Recordings), documenting Ribot’s first headline and the return of Henry Grimes at the historical venue in 2012 already included on Best of 2014 lists including Downbeat Magazine and NPR’s 50 Favorites.

Ribot has performed on scores such as “The Kids Are All Right,” “Where the Wild Things Are,” “Walk The Line (Mangold),” “Everything is Illuminated,” and “The Departed” (Scorcese).” Marc has also composed original scores including the French film Gare du Nord (Simon), the PBS documentary “Revolucion: Cinco Miradas,” the film “Drunkboat,” starring John Malkovich and John Goodman, a documentary film by Greg Feldman titled “Joe Schmoe,” a feature film by director Joe Brewster titled “The Killing Zone”, and dance pieces “In as Much as Life is Borrowed”, by famed Belgian choreographer, Wim Vandekeybus, and Yoshiko Chuma’s “Altogether Different”. Marc is also currently touring his live solo guitar score to Charlie Chaplin’s “The Kid”, which was commissioned by the NY Guitar Festival and premiered Jan 2010 at Merkin Hall, as well as a program of new arrangements of classic Film Noir scores commissioned by the New School Noir Arts Festival 2011.

Ribot will be appearing at the Village Vanguard on February 11, 13, and 15th with a variety of ensembles, including John Zorn.

Announcement: Suga’ in My Bowl’s live event–Who Owns Music?–lands the Raw Space in Harlem at 2031 Adam Clayton Powell Boulevard (between 121-122nd Sts.) on Wednesday February 18th 2015. Bassist William Parker, Grammy nominated vocalist René Marie, Jazzmobile and WBGO Radio’s Sheila Anderson, writer/poet Quincy Troupe, and saxophonist/Sista’s Place musical director Ahmed Abdullah converge to answer the question of who owns music and what that means for the future of jazz. It’s a WBAI fundraiser and entry is $15 at the door or a $25 pledge including a year’s WBAI membership! More details on the site soon, but save that date!

Read our review of the 2015 Winter Jazz Fest with coverage of Ribot and the Young Philadelphians on our blog.

Read the info on the Content Creator’s Coalition mentioned by Marc Ribot on tonight’s show and Zoe Keating’s fight against Google/YouTube’s attempt to strongarm musicians with their new policies.

Watch the Ribot Trio with Henry Grimes and Chad Taylor live in London.

Watch Ribot and the Young Philadelphians tear the roof off the sucka’ live at the 2015 Winter Jazz Fest!

Watch Ribot and Caged Funk live in this short clip from European TV.