The next show will air on Sunday September 2, 2012 from 11:00pm – 1:00am Monday on WBAI, 99.5 FM in the NYC metro area or streaming online at wbai.org and feature exclusive interviews with author Steven Isoardi, author/ Professor/ curator Kellie Jones, and Multi-instrumentalist Sabir Mateen talking about the work of Horace Tapscott and Black art in Los Angeles. You can hear a short promo below: 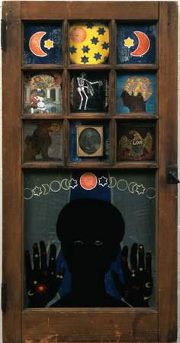 During this installment, we will feature “Now Dig This! Art and Black Los Angeles, 1960-1980” with the curator of the exhibit Dr. Kellie Jones, Associate Professor of Art History at Columbia University. We will also speak to Steven Isoardi, author of “The Dark Tree: Jazz and the Community Arts in Los Angeles” and multi-instrumentalist Sabir Mateen about pianist, composer and cultural activist Horace Tapscott.

Now Dig This! Art and Black Los Angeles 1960–1980 chronicles the vital legacy of the African American arts community in Los Angeles, examining a pioneering group of Black artists whose work and connections with other artists of varied ethnic backgrounds helped shape the creative output of Southern California. The exhibition presents approximately 140 works by thirty-two artists active during this historical period, exploring the rising strength of the Black community in Los Angeles as well as the increasing political, social, and economic power of African Americans across the nation.

Horace Elva Tapscott (b. Houston, 6 April 1934; d. Los Angeles, 27 Feb 1999) began piano studies at the age of six with his mother, the pianist Mary Lou Malone, and took up trombone two years later. His family moved to Los Angeles in 1943 and he studied trombone in school, playing with Frank Morgan in a high-school band; other young associates from this period included Don Cherry and Billy Higgins. Tapscott worked with Gerald Wilson’s orchestra before graduating from Jefferson High School in 1952. After studying briefly at Los Angeles City College he enlisted in the air force, and served in a band in Wyoming (1953-7). He then returned to Los Angeles and worked with various local bands before touring as a trombonist with Lionel Hampton (1959 to early 1961), for whom he also wrote a number of arrangements and at times sat in on piano. By the early 1960s he was playing piano exclusively, in part because of persistent dental problems resulting from an automobile accident during his high-school years.

By the end of 1961 Tapscott had formed the Pan Afrikan Peoples Arkestra, which at various times included Arthur Blythe, Stanley Crouch, Azar Lawrence, Marcus McLaurine, Roberto Miranda, the brothers Butch and Wilber Morris, David Murray, the saxophonist Michael Session, Sonship Theus, and Jimmy Woods. The purpose of the Arkestra was to preserve, develop, and perform African-American music within the community. Its rapid growth and branching off into related social and artistic activities led to the formation in 1963 of a larger organization, the Underground Musicians Association (UGMA), of which the Pan Afrikan Peoples Arkestra was a component. By the late 1960s the organization’s continued evolution led to broader community involvement, symbolized by a change of name to the Union of God’s Musicians and Artists Ascension (UGMAA). Although activities had tapered off by the mid-1980s, both the Arkestra and UGMAA continued to play a role in their community in the 1990s.

See more details on the documentary film about Black Los Angeles at the site of Leimert Park: The Story of a Village in South Central LA

Watch a short video preview of the “Now Dig This” show from its previous run at LA’s Hammer Museum. It shows some of the art.

See a few more photos discussed in this week’s Suga’ in My Bowl show: