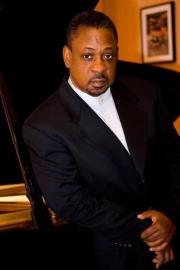 The next show will air on Sunday November 4, 2012 from 11:00pm – 1:00am Monday on WBAI, 99.5 FM in the NYC metro area or streaming online at wbai.org. WBAI’s stream may not be available due to to damage suffered in Hurricane Sandy. Because the station is operating from a remote location, the show may not start exactly at 11, so please be patient if you’re listening live. We’ve decided to make it available on our archives page at the normal air time to make it as available as possible.

In 1974, Gumbs enjoyed one of the highlights of his arranging career when he created a special arrangement of “Stella By Starlight” for the New York Jazz Repertory Company as a part of a concert honoring Miles Davis at Carnegie Hall. That same year, Gumbs performed on (former Suga’ guest) Woody Shaw’s “Moon Moontrane”. Later, he joined forces with trumpeter Nat Adderley and his quintet, contributing to the group’s recordings on the Atlantic and Steeplechase record labels. Steeplechase’s Nils Winter was impressed by Gumbs’ solo improvisations on several of Adderley’s performances and approached the young pianist that same year to record a solo piano album, Onaje. In 1985, Gumbs further heightened his visibility by contributing his arrangement of “Lady in My Life” to guitarist Stanley Jordan’s enormously successful album Magic Touch. The record held the number one spot on Billboard‘s jazz charts for 37 weeks. The pianist recorded two albums for MCA: That Special Part of Me and 1991’s Dare to Dream.

Gumbs received an NAACP Image Award in 2006 in the Outstanding Jazz category for his independent project Remember Their Innocence.

Jazz Improv Magazine selected his Sack Full of Dreams album featuring singer, actor, producer, and director Obba Babatunde as one of the best jazz recordings of 2007.