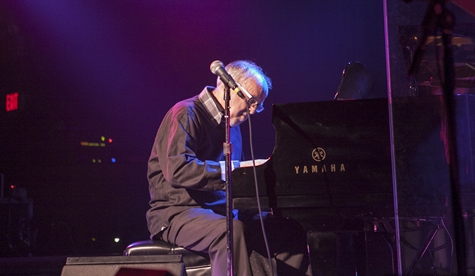 Reminder: Suga’ in My Bowl now airs weekly on WBAI, except for the last Sunday of the month! Please update your calendars, pass the word on to friends, and share on social media if you like the show.

The next show will air on Sunday December 8, 2013 from 11:00 PM – 1:00 AM Monday Eastern Standard Time on WBAI, 99.5 FM in the NYC metro area or streaming online at wbai.org. This installment of the program will feature an interview with pianist, composer, arranger and producer Bob James. This interview originally aired in June 2006 as part of WBAI’s Hip Hop Takeover. We discussed James’ career and his relationship to the hip hop art form.

The career of Bob James is long, varied and continues to evolve at every turn. From his first days in Marshall, Missouri, the music of Bob James has captivated audiences throughout the world.

In 1974, James finally recorded his own album, One, which launched a lifelong career of recording and performing live. After three more albums, James began his own label, Tappan Zee Records. This allowed James to spend more time in the studio, focusing on his own creative works. It was during this time that he recorded his own gold seller, Touchdown, which included his composition, “Angela”, the instrumental theme from the television sitcom Taxi, and possibly James’ best known work. James composed all the original music used in the series for its entire run. One On One, the first in three collaborations with Earl Klugh, was awarded a Grammy in 1980 for Best Pop Instrumental Performance, and has sold over a million copies. During this time, James set the standard for the smooth jazz sound in the late 1970s.

James is recognized as one of the progenitors of smooth jazz, however, his music has also had a profound effect on the history of hip hop music, having been sampled often. Two of James’ songs – “Nautilus” from 1974′s One and “Take Me to the Mardi Gras” from 1975′s Two – are among the most sampled in hip hop history. According to whosampled.com, “Nautilus” and “Take Me to Mardi Gras” have been sampled in thirty-two and forty-three hip-hop recordings, respectively. The title track from his 1981 album Sign of the Times was sampled in De La Soul‘s “Keepin’ the Faith”, and Warren G‘s “Regulate”. His “Angela” was sampled in the track “Cab Fare” by Souls of Mischief. The track “El Verano” from the 1977 album “BJ4″ is used as a sample in the song “Blown Away” by the Cocoa Brovaz and also in the Masta Ace Track “NY Confidential”. N.W.A‘s “Alwayz into Somethin’” uses a sample of “Storm King” from the album Three. “Can’t Wait” by Redman features a sample of “Caribbean Nights” from the album Touchdown. English Drum & Bass pioneer Adam F extensively sampled “Westchester Lady” on his 1995 breakthrough release Circles. Röyksopp sampled his version of “You’re as Right as Rain” for their instrumental track “Eple.” In addition, James is mentioned in a verse by André 3000 on “Black Ice” from Goodie Mob’s second album Still Standing.

While recording his Grand Piano Canyon album in 1990, James reunited with longtime friend drummer Harvey Mason, Jr. It would also be the first time James would work with guitarist Lee Ritenour, and bassist Nathan East. This would be the start of something beautiful, as these early sessions ignited a spark which would engulf the Jazz world as Fourplay. Fourplay’s first album was recorded and released in 1991. The Group would collaborate on a total of three albums, until 1998 when Ritenour left the group, and Larry Carlton took over. This version of Fourplay continued the group’s huge success for seven more albums. After 12 years, Carlton decided to delve further into his solo career, and the band brought in guitarist Chuck Loeb in 2010.

In 1985 James moved to Warner Bros Records, and kicked things off with Double Vision, a collaboration with David Sanborn, and produced by Tommy LiPuma. Double Vision was another Grammy winner, selling over a million albums.

Watch the intro and closing credits of the 1970s TV show Taxi, which features James’s “Angela”: