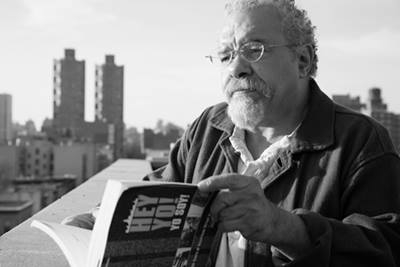 The next show will air on Sunday, April 20, 2014 from 11:00 PM – 1:00 AM Monday Eastern Standard Time on WBAI, 99.5 FM in the NYC metro area or streaming online at wbai.org. This week, “Suga’ In My Bowl” concludes its celebration of National Poetry and Jazz Appreciation Month by featuring New York-born Puerto Rican award-winning poet, playwright, teacher and activist Jesus Papoleto Meléndez. You can hear a short preview of the show below.

Jesus Papoleto Meléndez (Papo) is a proud Puerto Rican poet, playwright, educator and activist. His family migrated to this country from Puerto Rico and settled in El Barrio, East Harlem in the early 1950s. Papo was born and raised in New York City and became interested in the arts at an early age. By the time he was 19 years old, during the heyday of the Civil Rights and Black Arts Movement, he was already writing poetry. Papo published his first poem, “Message To Urban Sightseers” in Talkin’ About Us (1969), and in a short period of time he published three volumes of poetry: Casting Long Shadows (1970), Have You Seen Liberation (1971), and Street Poetry & Other Poems (1972), that largely reflected the social and political issues of the day. For as long as he can remember, Papo always saw poetry as this powerfully potent weapon that tells truths, and while he sometimes became uncomfortable being labeled a “political” or “social” poet, much of everything he wrote at that time, was really a recording of what was going on in the world. Papo ultimately explored playwriting, and his play, “The Junkies Stole The Clock,” was eventually produced by the New York Shakespeare Festival Public Theatre’s Nuyorican Playwright’s Unit in April, 1974.

Papo is often referred to as one of the “founders” of the Nuyorican Poets’ movement, but really it was about a group of Puerto Rican artists-activists coming together to make a difference in our communities, something of which Papo is very proud to have been a part of, but certainly does not wholly define himself as a poet. Around this time, Papo also began teaching workshops, first through the Teachers & Writers Collaborative, as a poetry-facilitator in the public schools, which is what he’s done for over 30-years.

By 1980, Papo grew disillusioned by the politics of the city, and he left for the “greener pastures” of California where he continued to write in peace, perform, teach, and eventually published the poetry collection, Concertos On Market Street (1993).

Over the years, Papo has performed at hundreds of venues, thousands of poetry readings, and he has appeared in film, television and radio programs. Papo has been published in numerous magazines, journals, anthologies, and textbooks and is proud to say that his work has also been taught in schools across the country. Through the offering of his creative writing workshops, Papo knows that he has inspired the lives of thousands of young people – some of whom currently call themselves poets.

His latest book is Hey Yo! Yo Soy! 40 Years of Nuyorican Street Poetry (2Leaf Press, 2012), a collected edition of Papo’s writing. It was adapted for the stage in 2014 by the Puerto Rican Traveling Theater.

You can find out more about Papo, his work and upcoming events at his website.

Watch Papo read his poem “Hey Yo! Yo Soy!” with the Welfare Poets live at the legendary Nuyorican Poets Café!


Watch Papo read his poem “It Was So Fly” live at the Bronx Documentary Center in 2013.


Watch a short (5 minute) documentary on Papo by Vagabond Beaumont.