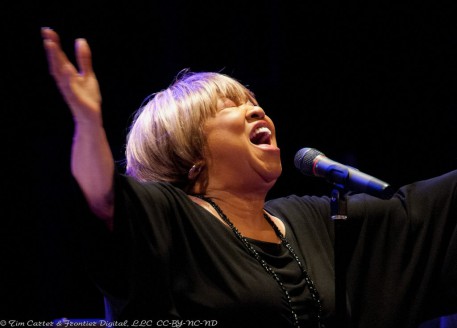 The next show will air on Sunday, February 21, 2015 from 11:00 PM – 1:00 AM Monday Eastern Standard Time on WBAI, 99.5 FM in the NYC metro area or streaming online at wbai.org. This broadcast will feature an interview with director and producer Jessica Edwards, who will discuss her latest feature titled Mavis!, which screens at Village East Cinema for only ONE WEEK on February 19 through February 25. We will also connect the generations of message music with a brief discussion with composer, vocalist, producer and curator Toshi Reagon.

Mavis! is the first feature documentary on gospel/soul music legend and civil rights icon Mavis Staples and her family group, The Staple Singers. From the freedom songs of the ’60s and hits like I’ll Take You There in the ’70s, to funked-up collaborations with Prince and her recent albums with Wilco’s Jeff Tweedy, Mavis has stayed true to her roots, kept her family close, and inspired millions along the way.

Featuring powerful live performances, rare archival footage, and conversations with friends and contemporaries, MAVIS! reveals the struggles, successes, and intimate stories of her journey. At 75, she’s making the most vital music of her career, winning Grammy awards, and reaching a new generation of fans. Her message of love and equality is needed now more than ever.

Toshi Reagon will curate a fifth year of the Women’s Jazz and Blues Festival at the Schomburg Center for Research in Black Culture, New York Public Library on Mondays in March during Women’s “Herstory” Month.

Watch the trailer for the Mavis! documentary film.