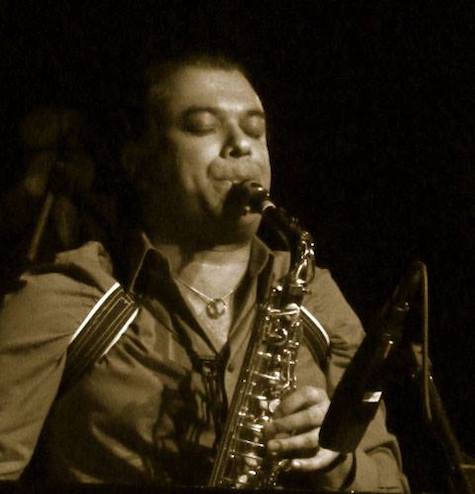 The next show will air on Sunday, October 15, 2017 from 11:00 PM – 1:00 AM Monday Eastern Standard Time on WBAI, 99.5 FM in the NYC metro area or streaming online at wbai.org. This broadcast features an interview with alto saxophonist, composer, bandleader and educator Rudresh Mahanthappa. We’ll start the show with a brief check in with BRIC Jazz Festival co-organizer Brice Rosenbloom for a preview of this year’s schedule.

Few musicians share the ability of Rudresh Mahanthappa to embody the expansive possibilities of his music with his culture. The saxophonist/composer hybridizes progressive jazz and South Indian classical music in a fluid and forward-looking form reflecting his own experience growing up a second-generation Indian-American. Just as his personal experience is never wholly lived on one side of the hyphenate or the other, his music speaks in a voice dedicated to forging a new path forward.

Hailed by the New York Times as possessing “a roving intellect and a bladelike articulation,” Mahanthappa has been awarded a Guggenheim Fellowship, two New York Foundation for the Arts Fellowships, and numerous commissions. He has been named alto saxophonist of the year four of the past five years in Downbeat Magazine’s International Critics Polls and for five years running by the Jazz Journalists’ Association. In April 2013, he received a Doris Duke Performing Artist Award, one of the most prominent arts awards in the world. In 2015, he was named a United States Artists Fellow.

Rudresh Mahanthappa’s Indo-Pak Coalition has been hailed by The New York Times as “a trio equally grounded in folk tradition and jazz improvisation, propos[ing] a social pact as well as a musical ideal.” The ensemble’s three formidable talents — Mahanthappa on alto saxophone, Rez Abbasi on guitar, and Dan Weiss on tabla — first documented their group conception in 2008 with Apti, which won praise from The Guardian for its “irresistible urgency.” Agrima, the long-awaited follow-up, finds Mahanthappa and the group expanding aesthetic horizons: adding a modified drum set, incorporating effects and electronics, and working with a broader audio canvas overall.The core of the band’s sound, the vibrant presence of Indian rhythmic and melodic elements in a charged, modern improvisational framework born of the New York jazz scene, remains firmly in place. The scheduled release date is October 1 as a digital download for $2.50.

Rudresh Mahanthappa’s Indo-Pak Coalition is scheduled to appear as part of the BRIC Jazz Festival on Saturday, October 21.

Watch Mahanthappa and the Indo-Pak Coalition in this 2010 live clip from the Flushing Town Hall.

Watch the video preview of the Indo-Pak Coalition’s Agrima.

Watch Mahanthappa and pianist Vijay Iyer in this live clip from the 2007 JVC Jazz Festival in New York.