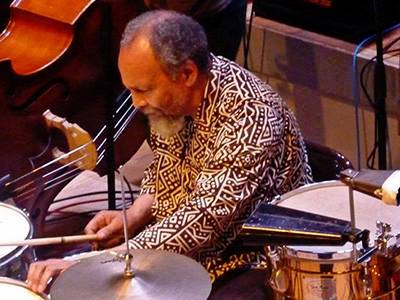 The next show will air on Sunday, July 8, 2018 from 11:00 PM – 1:00 AM Monday Eastern Standard Time on WBAI, 99.5 FM in the NYC metro area or streaming online at wbai.org. This broadcast features a conversation with Jake Meginsky, director of Milford Graves: Full Mantis. We will also revisit our 10/2/16 broadcast of an interview with percussionist/drummer, acupuncturist, herbalist, gardener, builder, scientist, inventor and martial arts master Milford Graves.

Milford Graves (born August 20, 1941 in Queens, New York) is an American jazz drummer and percussionist, most noteworthy for his early avant-garde contributions in the early 1960s with Paul Bley and the New York Art Quartet alongside John Tchicai, Roswell Rudd, and Reggie Workman. He is considered to be a free jazz pioneer, liberating the percussion from its timekeeping role. In fact, many of his music contemporaries, musician inspirees, and fans world-wide would argue that Graves is perhaps the most influential known musician in the development and continuing evolution of free-jazz/avant-garde music, to date. Milford Graves taught at Bennington College, in Bennington, Vermont, being a tenured professor from 1973 to 2011; in 2011, he is awarded Emeritus status.

Initially playing timbales as a kid growing up in Queens, Graves has worked as a sideman and session musician with a variety of jazz musicians throughout his career, including Pharoah Sanders, Rashied Ali, Albert Ayler, Don Pullen, Kenny Clarke, Don Moye, Andrew Cyrille, Philly Joe Jones, Eddie Gómez, and John Zorn. He has invested his time in research within the field of healing through music.

In 2013, Milford Graves along with Drs. Carlo Tremolada and Carlo Ventura received a patent for an invention that relates to a process of preparing a non-expanded tissue derivative, that is not subjected to cell proliferation in vitro, which has a vascular-stromal fraction enriched in stem and multipotent elements, such as pericytes and/or mesenchymal stem cells, or for preparing non-embryonic stem cells obtained from a tissue sample or from such tissue derivative, wherein the tissue derivative or such cells are subjected to vibrations derived from a heart sound to control the degree of differentiation or possible differentiation of the stem and multipotent elements into several other types of cells and optimize their potency. The invention relates also to a device for carrying out the process, to stem cells obtainable by the process as well as a drug for the regeneration of an animal tissue.

Watch Graves and saxophonist Kidd Jordan in this live clip from the 2013 Vision Festival.

Watch Graves and bassist William Parker in this 2010 live clip.