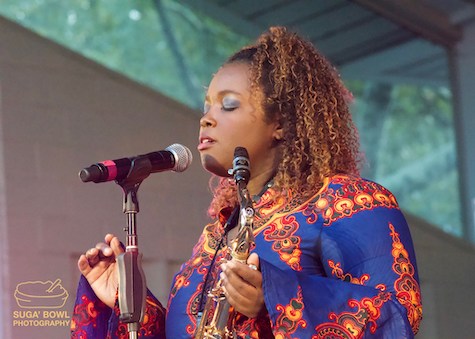 The next show will air on Tuesday February 12, 2019 from 10:00 PM – 12 Midnight Eastern Standard Time on WBAI, 99.5 FM in the NYC metro area or streaming online at wbai.org. This broadcast features an interview with saxophonist, flute player, composer, clarinetist, bandleader and educator Camille Thurman.

Acclaimed by Downbeat Magazine as a “rising star” singer with “soulful inflection and remarkable, Fitzgerald-esque scat prowess” and hailed by All About Jazz as a “first class saxophonist that blows the proverbial roof of the place”, Camille Thurman has been amazing audiences throughout the world with her impeccable sound, remarkable vocal virtuosity and captivating artistry. Many have praised her vocal abilities to the likeness of Ella Fitzgerald and Betty Carter. Her lush, rich & warm sound on the tenor saxophone has led others to compare her to tenor greats Joe Henderson and Dexter Gordon.

Thurman is a recipient of the Martin E. Segal –Lincoln Center Award for Outstanding Young Artists and was a runner up in the 2013 Sarah Vaughan International Vocal Competition. SF Jazz named Camille as one of “10 Rising Female Instrumentalists You Should Know” and she was featured in a ground breaking New York Times article recognizing women jazz musicians. She was a two-time award winning recipient of the ASCAP Herb Alpert Young Jazz Composers Award and a winner of the Fulbright Scholars Cultural Ambassador Grant to Nicaragua and Paraguay. In 2018 she along with the Darrell Green Trio was selected by the U.S. State Department to tour 5 countries in Africa as a U.S. Cultural Ambassador. Her compositions were featured and performed by her quartet in the ASCAP/ The Kennedy Center “Songwriters: The Next Generation” showcase. Camille has appeared on BET’s Black Girls Rock as the saxophonist & flutist in the All Star Band.

ReadThurman’s commentary on her experiences with sexual harassment in music at the Musician’s Union Local 802 blog.

Watch Thurman perform “Change of Mind” in this live clip from 2012.