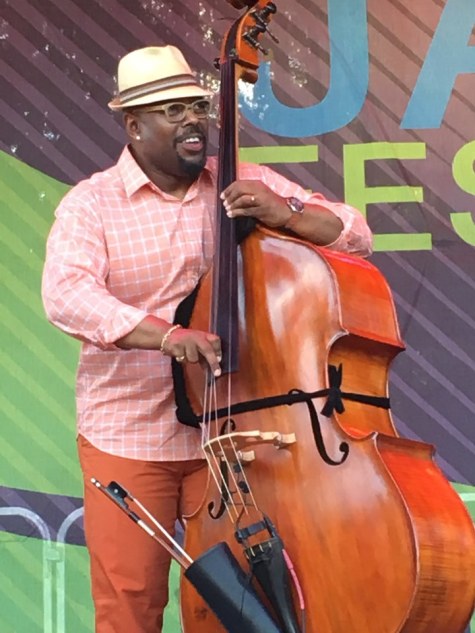 The next show will air on Tuesday August 13, 2019 from 10:00 PM – 12 Midnight Eastern Standard Time on WBAI, 99.5 FM in the NYC metro area or streaming online at wbai.org. This installment of the program allows us to catch up with one of our favorite Suga’ guests bassist, composer, musical director and contender for the “Hardest Working Man in Show Business” title Christian McBride.

Six-time GRAMMY®-winning jazz bassist Christian McBride can be likened to a force of nature, fusing the fire and fury of a virtuoso with the depth and grounding of a seasoned journeyman. Powered by a relentless energy and a boundless love of swing, McBride’s path has described a continuous positive arc since his arrival on the scene. With a career now blazing into its third decade, the Philadelphia native has become one of the most requested, most recorded, and most respected figures in the music world today.

Raised in a city steeped in soul, McBride moved to New York in 1989 to pursue classical studies at the Juilliard School. There he was promptly recruited to the road by saxophonist Bobby Watson. Call it a change in curriculum: a decade’s worth of study through hundreds of recording sessions and countless gigs with an ever-expanding circle of musicians. He was finding his voice, and others were learning to listen for it

Currently he hosts and produces “The Lowdown: Conversations With Christian” on SiriusXM satellite radio and National Public Radio’s “Jazz Night in America,” a weekly radio show and multimedia collaboration between WBGO, NPR and Jazz at Lincoln Center, showcasing outstanding live jazz from across the country. With his staggering body of work, McBride is the ideal host, drawing on history, experience, and a gift for storytelling to bridge the gap between artist, music, and audience. He brings that same breadth of experience to bear as Artistic Advisor for Jazz Programming at the New Jersey Performing Arts Center (NJPAC).

Whether behind the bass or away from it, Christian McBride is always of the music. He is a luminary with one hand ever reaching for new heights, and the other extended in fellowship—and perhaps the hint of a challenge—inviting us to join him.

Watch this live 2016 clip of A Christian McBride Situation at SFJAZZ.