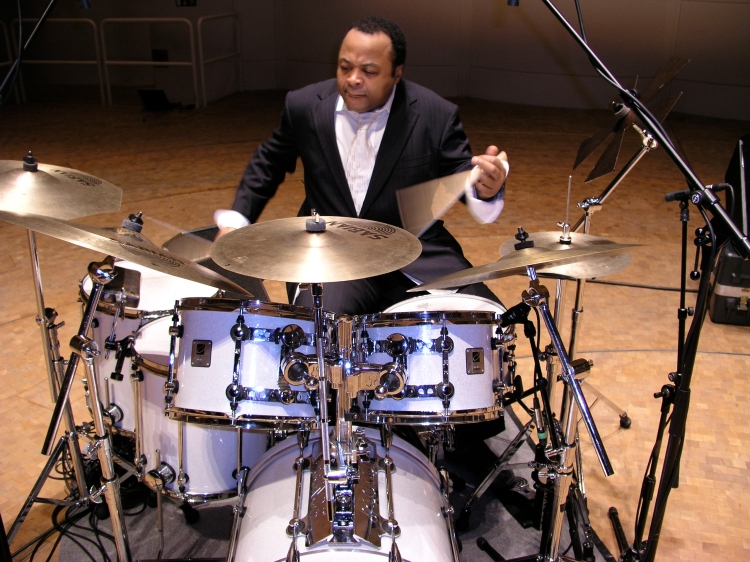 The next show will air on Sunday July 14, 2013 from 11 PM to 1 AM Eastern Standard Time on WBAI Radio, 99.5 FM in the NYC metro area or streaming online at wbai.org. This installment of “Suga’ In My Bowl” will feature an exclusive interview with drummer Jeff “Tain” Watts, who holds the unique distinction of being the only musician to appear on every Grammy Award winning jazz record by both Wynton and Branford Marsalis.

One of the most in demand jazz drummers in the world today, Jeff initially majored in classical percussion at Pittsburgh’s Duquesne University, where he was primarily a timpanist, followed by enrollment at the Berklee School of Music, where he pursued jazz studies alongside such talented players as Branford Marsalis, Kevin Eubanks, Greg Osby, Aimee Mann, Steve Vai and Marvin “Smitty” Smith.

Jeff has worked in the film and television industry as both a musician on the Tonight Show with Jay Leno and as an actor, Rhythm Jones in Spike Lee’s “Mo Better Blues”. Jeff joined Kenny Garrett’s band after returning to New York in 1995 after three years in LA on the Tonight Show. Watts also continued to record and tour with Branford Marsalis as well as Danilo Perez, Michael Brecker, Betty Carter, Kenny Kirkland, Courtney Pine, Geri Allen, Alice Coltrane, Greg Osby, Steve Coleman, Gonzalo Rubalcaba, and Ravi Coltrane.

Along with explosive power, blinding speed and mastery of complex rhythms and time signatures, Watts brings a rare sense of elegance, tried-by-fire composure, and a gritty street funk to his music. His artistic ingenuity expresses itself in his incomparable technique, sweltering sense of swing, and an extraordinary ability to imbue his music with majestic grace and elegant repose. A true jazz innovator, Watts never fails to deliver the percussive magic that has been his trademark since his emergence on the contemporary jazz scene.

The Watts Family Reunion Band will be at the Jazz Standard in New York from July 18-21. Tune in to win a pair of tickets to one of the shows! “Tain” will also be appearing at the 2013 Newport Jazz Festival with David Gilmore’s Numerology and be leading a group at New York’s Village Vanguard in September 2013.