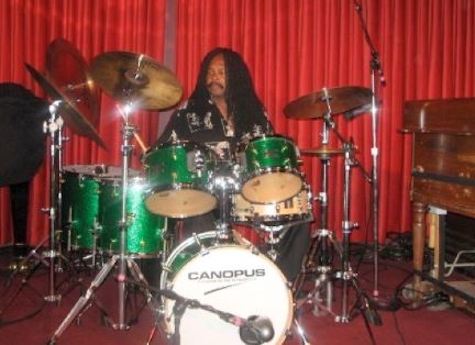 Reminder: Suga’ in My Bowl now airs weekly on WBAI, except for the last Sunday of the month! Please update your calendars, pass the word on to friends, and share on social media if you like the show.

The next show will air on Sunday Janury 12, 2014 from 11:00 PM – 1:00 AM Monday Eastern Standard Time on WBAI, 99.5 FM in the NYC metro area or streaming online at wbai.org. This installment of the program will feature an exclusive interview with Chairman/CEO of Tenacious Records, composer, arranger, producer, drummer, multi-instrumentalist and actor Alphonse Mouzon.

Alphonse Mouzon, (who is an African American mixed with French and Blackfoot Indian) was born on November 21st 1948 in Charleston, South Carolina. He attended Bonds-Wilson High School where he received his early musical training under the direction of saxophonist high school music teacher Lonnie Hamilton III, and took some drum lessons from Charles Garner before playing gigs with the Lonnie Hamilton Band. Following graduation from high school, he moved to New York to study music and drama at The City College of New York and medicine at Manhattan Medical School. Mouzon took drum lessons from jazz pianist Billy Taylor’s drummer Bobby Thomas. While attending college, Mouzon played in the pit band of the Broadway show PROMISES, PROMISES after being recommended by Thomas. Mouzon worked as a medical technologist at Columbia Presbyterian Hospital after graduating from Manhattan Medical, but abandoned a medical career as he his musical reputation grew.

Mouzon’s musical associations read like a veritable Who’s Who of Modern Jazz and Pop Music. His talents cover a broad range of musical disciplines and philosophies. He was the rhythmic foundation for the far reaching musical explorations of pianist McCoy Tyner. He was a charter member along with keyboardist Joe Zawinul and saxophonist Wayne Shorter, of the group Weather Report. Along with guitarist Larry Coryell, Mouzon was co-founder of The Eleventh House, the seminal fusion band of the seventies. Mouzon and Coryell still tour together in a trio and with the Eleventh House. Mouzon’s musical credits include the 1991 film Dingo and accompanying Miles Davis soundtrack. The often demanding Davis was impressed enough to praise Mouzon’s skill in his autobiography.

Mouzon’s name can be found in just about every Jazz Encyclopedia/ Dictionary, and is listed the 2nd edition of Marquis Who’s Who In Entertainment and Who’s Who In The World. He was voted the #2 BEST MULTI-INSTRUMENTALIST in the 1995 Jazziz Magazine Annual Readers Poll.

Mouzon draws inspiration from his Christian faith and has survived prostate cancer. He strongly encourages every man over 35 to have a PSA blood test done to make sure cancer is not present, since early detection is a lifesaver.

Listen for our On the Bandstand segment with NYC metro area appearances of Suga’ guests at the end of the first hour. Also on the blog this week will be a cheat sheet to NYC’s Winter Jazz Fest, highlighting former Suga’ guests.

Watch this clip from the 1991 film Dingo, which has a cameo appearances by Miles Davis and Mouzon. Mouzon can be seen briefly in the background here:


Watch this live 1971 performance of the McCoy Tyner Quartet with Mouzon: