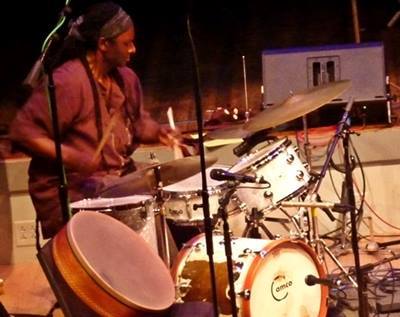 The next show will air on Sunday, June 22, 2014 from 11:00 PM – 1:00 AM Monday Eastern Standard Time on WBAI, 99.5 FM in the NYC metro area or streaming online at wbai.org. This installment of Suga’ in My Bowl will feature percussionist Hamid Drake.

Hamid Drake was born in Monroe, LA, in 1955, and later moved to Chicago with his family. He ended up taking drum lessons with Fred Anderson’s son, eventually taking over the son’s role as percussionist in Anderson’s group. As a result, Fred Anderson also introduced Drake to George Lewis and other AACM members.

Drake also has performed world music; by the late ’70s, he was a member of Foday Muso Suso’s Mandingo Griot Society, and has played reggae.

Hamid Drake has been a member of the Latin jazz band Night on Earth, the Georg Graewe Quartet, the DKV Trio, Peter Brötzmann’s Chicago Octet/Tentet, and Liof Munimula, the oldest free improvising ensemble in Chicago.

By the close of the 1990s, Hamid Drake was widely regarded as one of the best percussionists in improvised music.

See our blog for photos and coverage from Vision Fest 19.